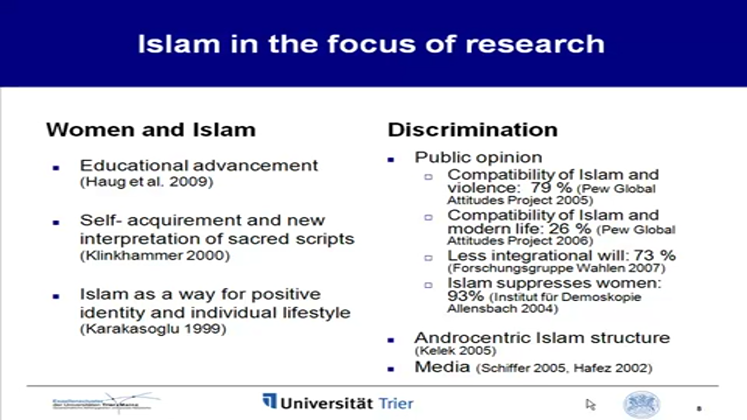 Islam has been a part of the German society for quite a long time. But especially since the last decade there is a growing debate about the unwillingness of integration, the compatibility of democracy and Islam, about Islamism, and the existence of parallel societies. It is often argued that Islam and democratic values are not consistent. Against this background women's rights issues are to be found increasingly in the centre of the public attention. This topic is usually discussed in the context of forced marriages and honor killings. For Islam critics those issues are an example of the lack of capacity to reform Islam in general.

In the presented study independent Muslim women's associations and their members are analyzed and described. Markus Gamper focusses primarily on the description of the associations and their membership structure. Especially the role of Islam and its importance in the construction or stabilization of the identity of the members are to be discussed.

Markus Gamper's PhD thesis about “Islamic Feminism in Germany” was written at the University of Trier within the context of the Cluster of Excellence “Societal Dependencies and Social Networks”. He is now working as postdoc graduate at the Cluster. He is a specialist on quantitative and qualitative network analysis and one of the organizers of the annual Trier Summerschool on Social Network Analysis.