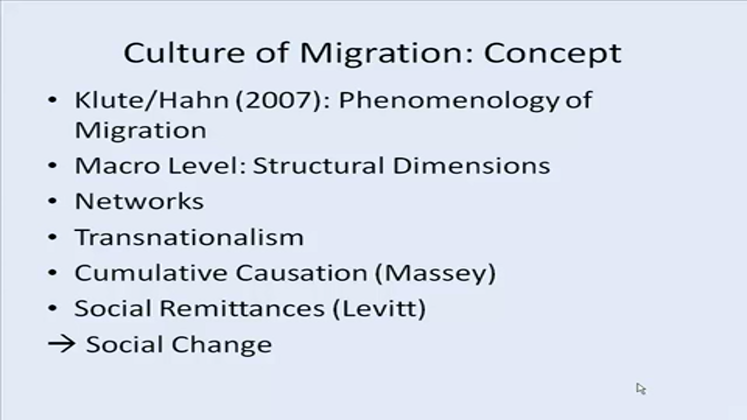 How Societies are Shaped by Migration

In migration theory, the situation of the sending country is – apart from studies about remittances, the nexus between migration and development and return migration – a neglected field. The Philippines is largely a sending country of migrant workers and nowadays, more than 10 % of the population live and work abroad. In 2010, the remittances of overseas workers amounted 17% of the Philippine GDP. Migration now is part of the Philippine cultural system and a culture of migration has been established. Nearly every individual shares the social experience of migration, for example by having a family member abroad.

Christ presents the concept of culture of migration. The concept gives a holistic view to migration instead of the prevailing structural approaches on the one hand or ethnographic studies on the other hand. Anthropologists focusing on Southeast Asia discuss the Indonesian concept of merantau (to go abroad). Klute and Hahn argue for a phenomenological approach. However, the case of the Philippines shows that structures like migration policies and the international division of labor have to be included in a holistic account of a culture of migration. The concept also benefits from studies about migration networks and chain migration. The case of the Philippine culture of migration is a strong example of how migration transforms not only the individual migrant or the families, but the society as a whole and is embedded in local cultural meanings.

Simone Christreceived a M.A. in Sociology, Cultural Anthropology and Political Science at the University of Trier in 2008, writing her thesis on Filipina migrant workers in Dubai, United Arab Emirates. Since 2008, she works as a lecturer at the Department of Southeast Asian Studies at the University of Bonn.