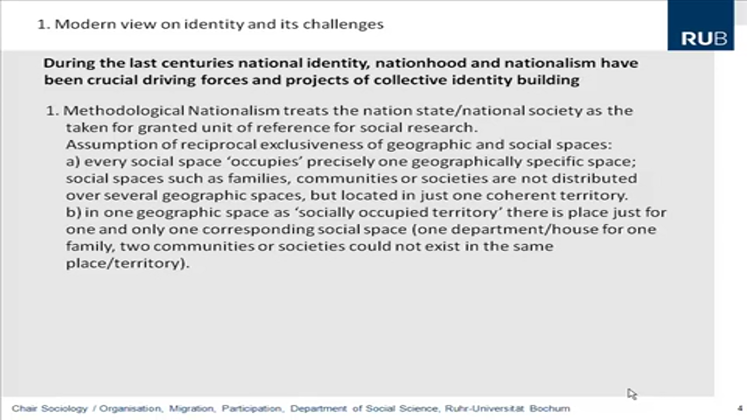 Spaces and Levels of Collective Identity

Migrants and people in motion at large are challenged by spacial and mental aspects. Ludger Pries talks about the multiple levels and spacial dimensions of the production and re-production process of collective identity based on his research, but also his experiences as fellow researcher abroad. His approach goes far beyond the concept of hopping from one container culture to the other. Instead he conceptualizes identity within the context of ethnicity and internationalisation on the one hand and cosmopolitanism on the other hand.

Ludger Pries is a professor for sociology at the Ruhr-University Bochum. He chairs the Immigration and Ethnic Minorities Section of the German Society for Sociology. He studied sociology and social sciences at the universities of Bochum, Erlangen-Nürnberg and Puebla (Mexico). Since then, research and teaching assignments have taken him to Brazil, Mexico, Spain and the United States. His research focuses on comparative studies in organisational and labour sociology as well as on the sociology of migration and transnationalism. As he especially covers issues concerning transnational migration and social incorporation processes, Ludger Pries' latest publications deal with processes of transnationalism theoretically and empirically (both Wiesbaden 2010).