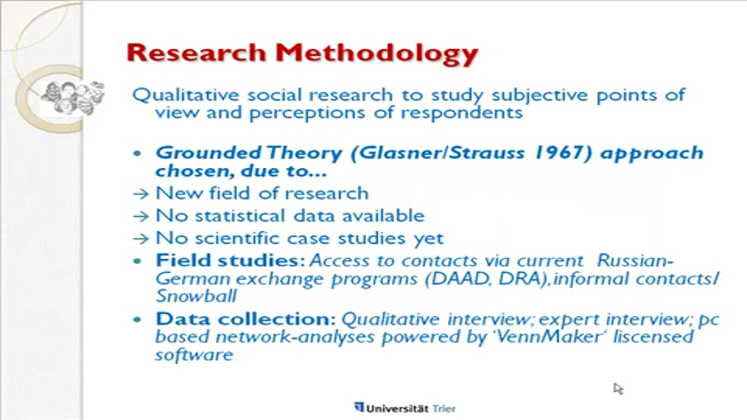 The Identity of Highly Qualified Migratns Between Russia and Germany

Most of the young, highly qualified ethnic Germans from the former Soviet Union migrated as children together with their parents to Germany. They did not actively decide for themselves and are known as ‘generation 1.5’. They show characteristics of their country of origin and continue their socialization in another society, adapting cultural habits of their new country at the same time. - Compared with the other migrant groups, the research group of Anet Sahakyan's case study shows two special features: their German ethnicity and their German citizenship. The focus of her research is the question of the possible re-migration of highly qualified young ethnic Germans into their countries of origin with the question of identity and cultural belonging in the (circular) migration process being a relevant part of her research.

Concerning especially “ethnic Germans” from the former Soviet Union as a ”special group of migrants” (German citizenship due to the status as German with an ethnic background), it is interesting to see how the identity ascription is constructed and also adapted during the process.

Anet Sahakyan holds a diploma degree in foreign languages from the University of Eriwan (Armenia). She finished her master in sociology at Trier University and is currently a PhD candidate and research assistant in the Collaborative Research Centre 600 (SFB 600) at the University of Trier. Her key research spheres are: migration, re-migration and transnational studies.